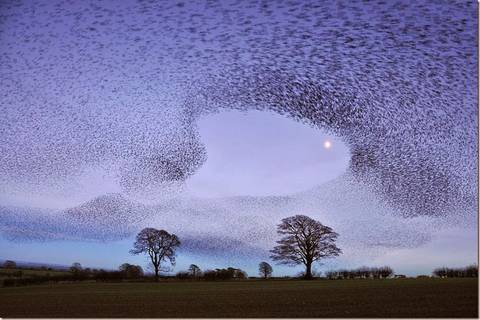 Early morning cycle, enjoying the cool air on my cheeks, the sun shining, a blue sky. A woman walking toward me, holding a dog on a lead. My guess is she was returning from a walk, on her way out of Ashton Court a large local estate that I was heading into.

She was walking in what an old teacher of mine called the ready to hug position. Arms out slightly from her sides, the beginning of a smile on her face, her fleece unzipped letting in the air. My eye contact with her was almost non-existent but it was there and she was present and full of life.

She was offering me a wake up and pay attention moment, which I shouldn’t have needed as I was still full of a murmuration.

A few days ago I watched the starling murmuration at dusk on the Somerset levels.  The sun was setting; a fine crescent moon was visible in the sky.  Perhaps 60 or 100 people had gathered, there was light chat and talk as we all waited, getting colder and wondering if we were going to be graced.

A small group of birds fly past and then another is seen in the distance, soon people are looking in all directions, seeing more and more birds.  Glastonbury Tor is in the distance is surrounded by thousands and thousands of birds, only visible at this distance as a sort of thin black smoke, moving of its own volition.

The birds come closer to us, near to the reed beds and then there are a lot, near us, around us, creating their patterns in a way that looks entirely choreographed.  People are laughing and exclaiming; I am full of wonder and delight.

We linger as the birds land, they seem to dive into the fields and disappear, then they rise up, move and land again.  I suspect most of us are waiting for another spectacular show and in their apparent disappearance, the loss of the sun, a few stars and the moon, we have something spectacular.

Its finishing is as important as it happening at all.

Life starts and it finishes, it’s meant to do this.

I can feel myself being both at ease and profoundly disturbed by this thought.

In amongst the disturbance I know that I am feeling moments of grace – they are powerful food.